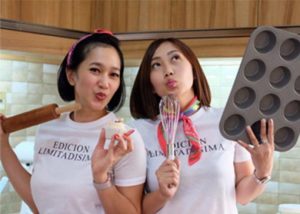 Medina Aprilia is a mother of 3 who gave up her career in Advertising Agency to raised her children. Along the way she spends hours in the kitchen making snacks for her child when she finally found the perfect recipes for our Cupcakes and desserts.

Wynda Mardio is a mother of 2 who was a Producer in a National TV Station. At first, she trade her career to channel her cooking passion by opening Steak Hotel by Holycow! at March 2010 and build Bhadranaya Group, which specialize on F&B establishment up until now. Later on, she developed Cupcakes Company with Medina Aprilia, making all these delicious cupcakes and desserts come true.

To get up close and personal with Medina and Wynda, go follow their Instagram: @Medina1704 and @wyndamardio